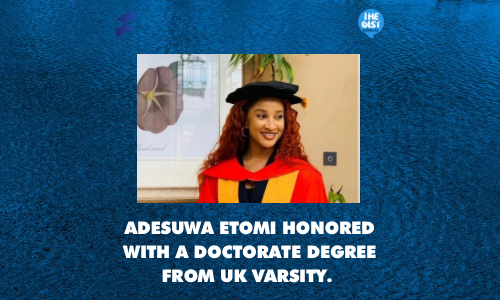 Nollywood actress, Adesua Etomi has bagged an honorary doctorate degree in arts at the University of Wolverhampton in the United Kingdom (UK).

According to a statement by the varsity, the film star is recognised for “her phenomenal contribution to arts and culture”.

Adesua was also described as “one of most in-demand, versatile and successful” actresses in Africa.

“Adesua Etomi-Wellington, a Nigerian Nollywood actor, who graduated with a degree in Drama & Performance in 2009 from the University, has been awarded a Doctor of Arts in recognition of her phenomenal contribution to arts and culture,” the statement reads.

“Adesua is one of the most in-demand, versatile, and successful talents from the African continent. She has starred in many of the most successful Nollywood blockbuster movies of all time and has a global following of millions on Social Media.”

The actress also spoke about her time as a student at the institution.

“My experience at Wolverhampton was literally life-changing – it is the foundation upon which my career has been built,” the actress said.

“When I enrolled on my course in 2006 I was not confident at all. There is silent confidence that comes as a result of being informed and knowledgeable. I was taught to believe in my natural abilities but also put those abilities to good use. I was taught that talent is great but you need to be hard working to achieve it.

“This award is very humbling for me and I hope that it inspires prospective and current students to pursue careers in the creative industries.”