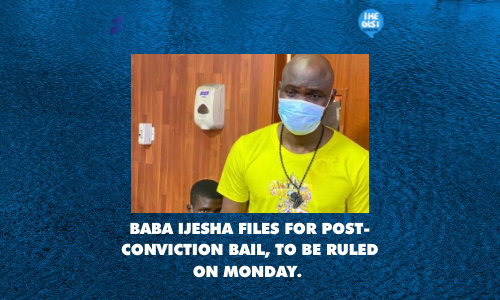 Nollywood actor, Olanrewaju James, popularly known as Baba Ijesha has filed for post-conviction bail at an Ikeja Domestic and Sexual Violence Court pending the hearing and determination of his appeal before the Lagos Division of the Court of Appeal.⁣

Baba Ijesha, who was sentenced to 16 years imprisonment for child defilement in July, was in court on Wednesday, 14th of September, 2022, to sort for the suspension of the imprisonment pending appeal.⁣
⁣
The actor was convicted for child defilement, indecent treatment of a child, sexual assault, and attempted sexual assault by penetration and is serving a five-year concurrent jail term.⁣
⁣
During proceedings, his lawyer Chukwudi Adiukwu, informed the court they have filed an application for bail pending appeal, pursuant to Section 6 (6) of the 1999 Constitution, as amended.⁣
⁣
The preceding judge, Justice Oluwatoyin Taiwo adjourned the session to Monday, 19th of September, 2022, for ruling on the bail application.