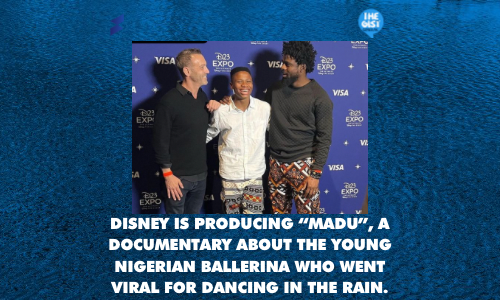 Disney is producing “Madu”, a documentary about the Nigerian ballerina who went viral for dancing in the rain

Disney announces that they are producing a documentary on the Leap of Dance Academy young ballet dancer, Anthony Madu, the young talent who went viral for dancing in the rain.

Disney Original Documentary announced that it’s producing a documentary on Anthony Madu. According to Dateline, “It will follow a remarkable course of events that began in 2020 when Anthony’s ballet teacher posted 44 seconds of him performing graceful pirouettes and leaps in that unexpected setting.

It’s titled “Madu,” and it’ll have a festival run before a limited theatrical release.”