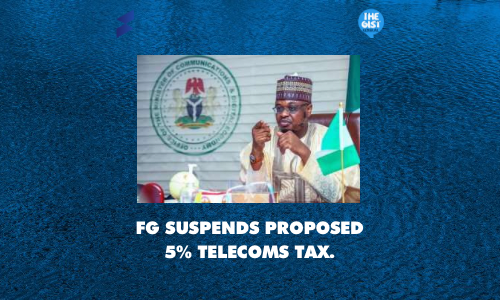 The Minister of Communications and Digital Economy, Isa Pantami, made this known on Monday, 5th of September, 2022, in Abuja.

At the inaugural meeting of the Presidential Committee on Excise Duty for the Digital Economy Sector, Isa Pantami said the telecommunications sector is already overburdened by excessive and multiple taxations.

The government through the Budget Office of the Federation had earlier revealed that it would commence the implementation of its proposed excise duties on telecommunication services and beverages in 2023.

However, Pantami rejected the five per cent tax on telecom services, saying that the implementation of the tax would increase the cost of telecommunication services for Nigerians.

He had said, “The Ministry of Communications and Digital Economy is not satisfied with any effort to introduce excise duty on telecommunication services.

“Beyond making our position known, we will go behind the scenes and go against any policy that will destroy the digital economy sector. We will go to any extent to legitimately and legally defend its interest.”

Reacting in a statement issued by her ministry, the Minister of Finance, Budget and National Planning, Zainab Ahmed, faulted Pantami’s disapproval.

She added that he was involved in the Finance Act.
She insisted that the federal government would go ahead to implement the five percent excise duty on telecommunications services in 2023.

According to her, “Against the comments by Isa Ali Pantami, honourable minister of communication and digital economy, concerning the five percent excise duty hike on telecoms services, it is worth noting that there was a circular stating the planned hike which was addressed to the communication minister and other relevant ministries and agencies of government.

“The circular Referenced No. F. 17417/VI/286, dated March 1, 2022, and titled “Approval for Implementation of the 2022 Fiscal Policy Measures and Tariff Amendments” was addressed to different ministers, including the honourable minister, communications and digital economy and other heads of government agencies.’’

The Influence of TikTok on the Nigerian Entertainment Industry