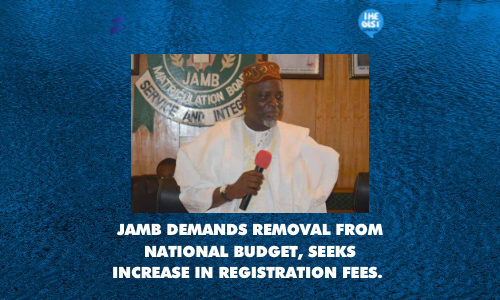 The Joint Admissions and Matriculation Board (JAMB) has asked the house of representatives committee to exclude it from the annual budgetary allocation.

Ishaq Oloyede, JAMB registrar, made the request on Wednesday, 14th of September, 2022 when he appeared before the house of representatives committee on finance at the interactive session on the 2023-2025 medium-term expenditure framework (MTEF).

Oloyede said the board should be allowed to make an upward review of its examination fee as a “condition” for JAMB to be excluded from budgetary allocation, stating that there is nowhere that the government funds this type of examination.

“We are comfortable to be taken off the budget but there are conditions. One of the conditions, for example, when students registered in 2016, we collected N5,000 and that had been on for five years before I joined.

“I believe we should revert to the N5,000 we were charging. Given the inflation, if we charge N10,000 — I am just giving it as an example — nobody will ask the federal government for one kobo. I am not aware of anywhere in the world, except maybe Finland, that charges as low as JAMB is charging.”

3 things you should know about Male and Female Orgasm.