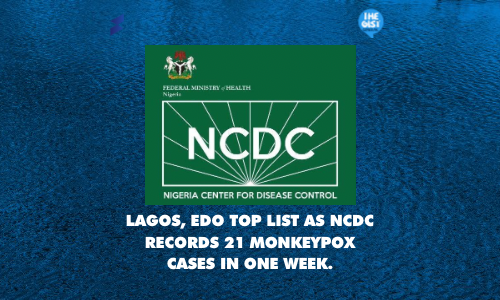 The Nigeria Centre for Disease Control (NCDC) says 21 new cases of monkeypox have been recorded across the country within the last seven days.

The NCDC made this announcement in a statement published on its official website, on Sunday.

The new figure raises the total number of confirmed cases of monkeypox in the country to 241. The agency also provided guidelines on how to avoid the virus.

“Of the 241 confirmed cases of monkeypox in the country, Lagos state has the highest burden of the disease, with 42 confirmed cases since the beginning of the year,” the agency said.

“This translates to 17.4 per cent of the total burden of the disease in the country.

“Overall, since the re-emergence of monkeypox in September 2017 to August this year, a total of 1,116 suspected cases have been reported from 35 states.

Out of the total number of suspected cases from September, NCDC added that a total of 14 deaths have been recorded with a case fatality rate of 3% in 10 states.

“You have till December to crush all terrorists, bandits” – Buhari to Armed Forces