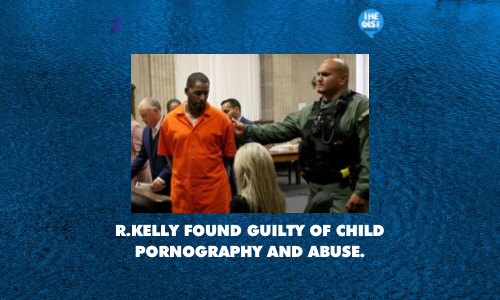 Singer, R.Kelly, best known for the 1996 smash hit ‘I Believe I Can Fly, has been found guilty at his child pornography trial in Chicago.

According to the Associated Press, a federal jury in Chicago found R. Kelly guilty of producing child pornography and abusing minors in his second sex crimes trial in two years. However, he continuously pleads not guilty for all charges.

The 55-year-old musician — full name Robert Sylvester Kelly — was accused of videotaping himself having sex with underage girls.

The singer was already convicted of sex trafficking in June and still faces additional trials.

He is also serving a 30-year sentence after prosecutors proved that he ran a decade-long sex trafficking enterprise through his music business.

R.Kelly had been arrested by federal authorities in Chicago back in 2019 and transferred to New York in June 2021.

Disney is producing “Madu”, a documentary about the Nigerian ballerina who went viral for dancing in the rain