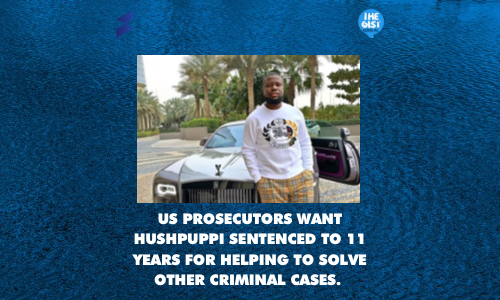 United States prosecutors have asked a federal judge to sentence Ramon Abbas, alias Hushpuppi, a Nigerian internet fraudster, to 11 years in prison and three years of supervised release for his role in a multinational conspiracy that earned him millions of dollars between 2019 and 2020.

American attorneys led by Khaldoun Shobaki in the U.S. Central District of California argued that Hushpuppi should also be asked to pay $1.7 million in restitution; $500,000 in fines and $100 in administrative fees, per recommendations, submitted ahead of his sentencing on September 21.

“The government recommends that the defendant be sentenced to 135 months imprisonment, followed by a three-year term of supervised release, and that defendant be ordered to pay restitution of $1,732,841.34, a fine of $500,0000, and a mandatory special assessment of $100.”

“By his own admission, during just an 18-month period defendant conspired to launder over $300 million,” the prosecutors said. “While much of this intended loss did not ultimately materialize, defendant’s willingness and ability to participate in large-scale money laundering highlights the seriousness of his criminal conduct.”

The development came more than two years after the infamous Internet fraud ringleader was arrested in Dubai in June 2020 for driving multiple schemes that targeted victims in Europe and the United States. He pleaded guilty in April 2021 after prosecutors discovered his involvement in a separate conspiracy to defraud a Qatari businessperson, who lost $810,000 in the process of trying to obtain an elusive loan to set up an international school.

“Defendant’s history and personal characteristics are not mitigating. Indeed, given his stable family and education, defendant was well situated to be a law-abiding member of society,’’ officials said.